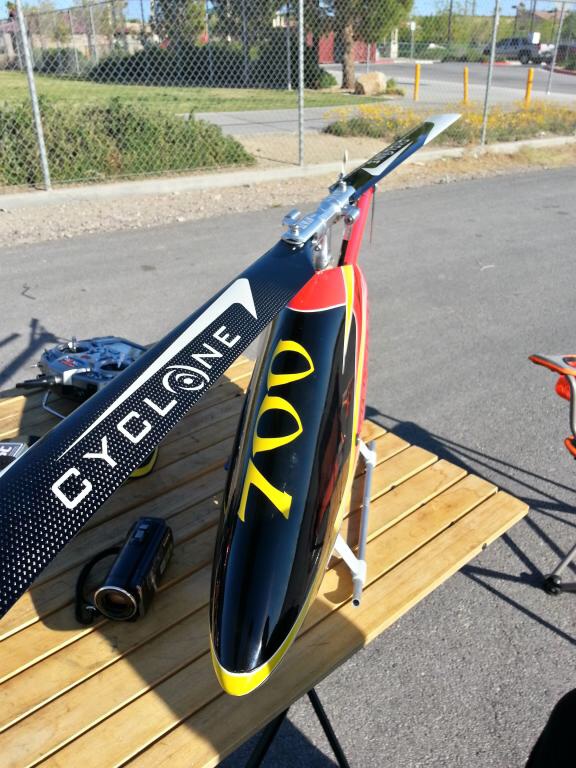 Release of the Mostro kits

We’re happy to announce that the Mostro is being released. Production kits are being sent to the rep pilots and we’re getting ready for shipments to customers. Customer shipments could start this week or next week at the latest. We thought we would start shipping today March 31st. but we decided to incorporate a last-minute suggestion from a building session last Saturday to make it easier to do some setups. We’re making that addition right now so that the kits are shipped with them.

As some of you know we spent this last weekend in Las Vegas with our Factory Pilot Jason Bell doing the final testing of the production kit. We built a final production kit on Friday and Saturday and flew it on Sunday. Unfortunately as many of you know since you were this last weekend at the Vegas funfly you saw Sunday’s weather at the Vegas FunFly with winds that were a constant 30-40 mph throughout the day so it was tasking for our pilot but he put the Mostro through some very grueling final tests. We did video record part  of those flights and we have some from previous test sessions so we will be putting them together and posting a video in a couple of days. We also taped a video of the DFC head heli flying at an incredible low 900 rpm even in that wind to demonstrate how the RigidCore dampening system works at any speed regardless of the head type.

Now about the Mostro V2

That’s what we jokingly call it at the factory. We internally call it the V2 Mostro because there have been so many improvements done on the last few months to what people have seen so far that they would easily qualify it as a V2 version of the Mostro. Some of them were already posted like the dual one-way system, the new swashplate and other ones but there are many more.

We need to first thank our fellow heli pilots for your all the feedback we have received because without it we wouldn’t know what customers want or have concerns about so that we can make design changes and improve the design. Here are the changes that are coming out on the release kits:

Some customers told us that they felt better if they had a location to place the ESC outside in the open so we decided to design one and make it a part of the kit. As you can see in the following pictures there is a new ESC plate that allows you to place the ESC under the batteries. This location is also adjustable in height to let you adjust the plate and put it close to your battery packs. Some customers felt very strongly about having that ability so we made it an optional part. We did test it in flight too so we know it works great too. 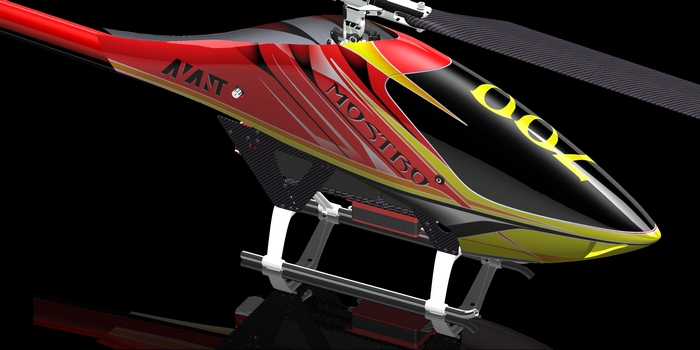 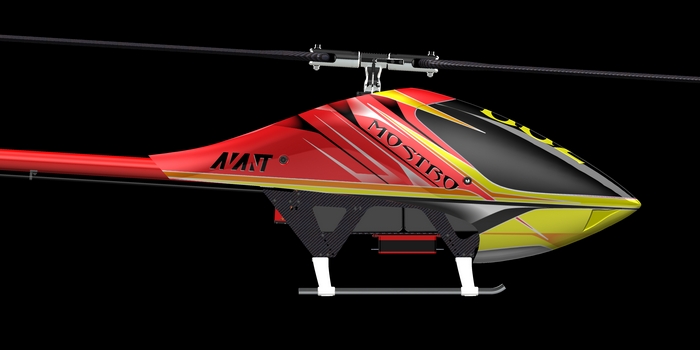 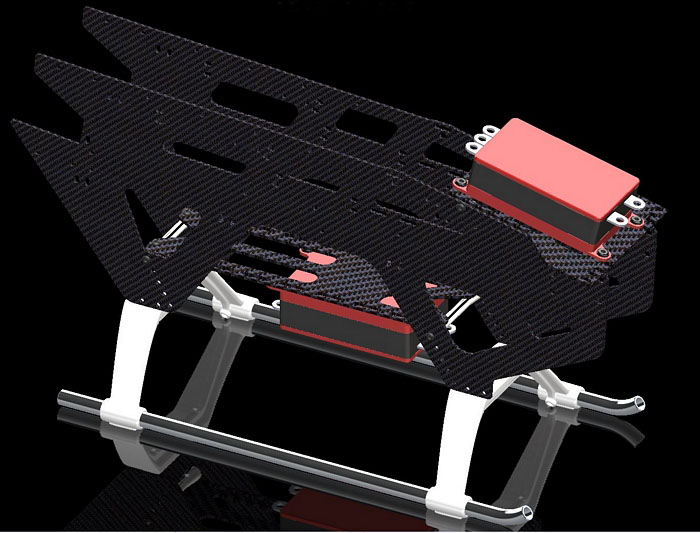 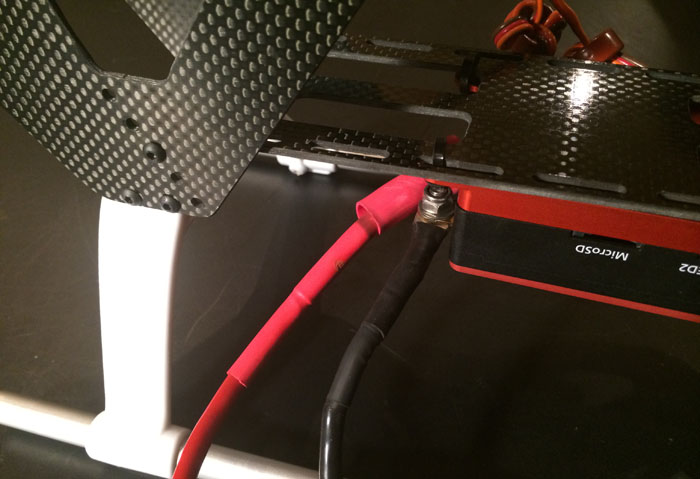 An actual unit with a large ESC installed.
Notice how the height is adjustable so that you can place it close to your battery packs.

In the initial design the air diverter plate was attached to the canopy. Some customer were concerned that the installation of the plate would be difficult and asked if there was a way to attach it to the heli. The answer is yes and it’s now part of the kit. The problem was that we had to have a way to get the batteries in and out so we went ahead and made it into a swiveling diverting plate that at the same time raises the locking bracket for easy insertion of the battery plate. It also serves as an insurance policy so that the battery place won’t slide out even if you forgot to lock it in place. 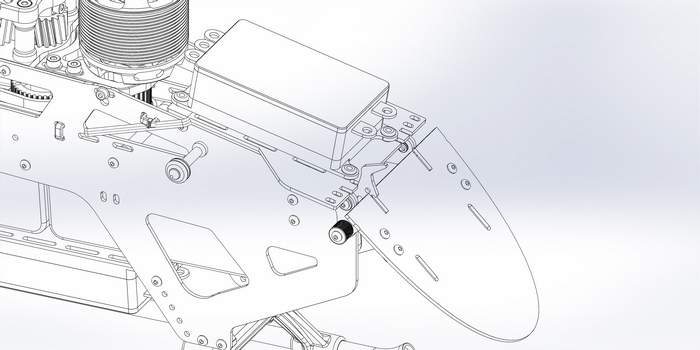 There is a thumbscrew that keep the whole system locked in place. 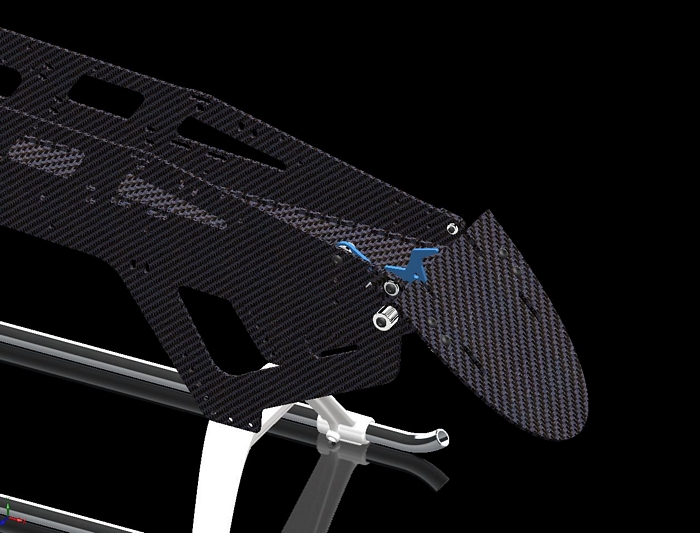 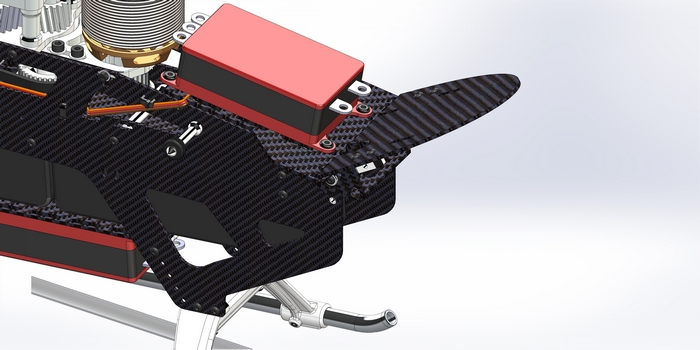 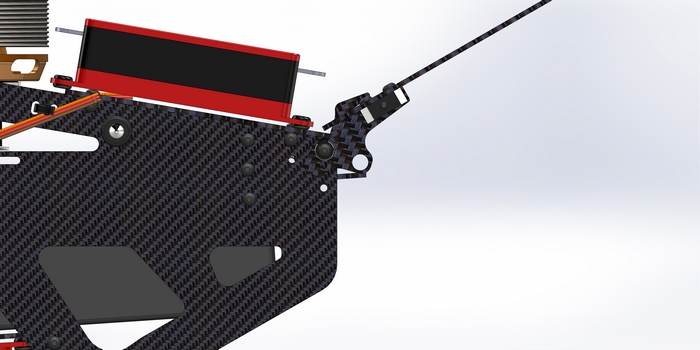 You can see it in motion in this video.

Some customers asked us to give them an option for placing a receiver battery in the front too so we made slots for the straps in the new frame-attached diverter plate to allow for a front-mounted battery. 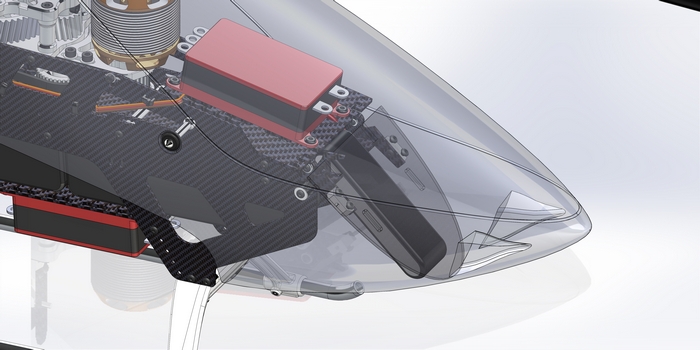 Also from feedback from customers that had some concerns we now have the DFC axle made out of a strong Stainless steel that’s attached to the pitch arms via a large threaded end of the axle. 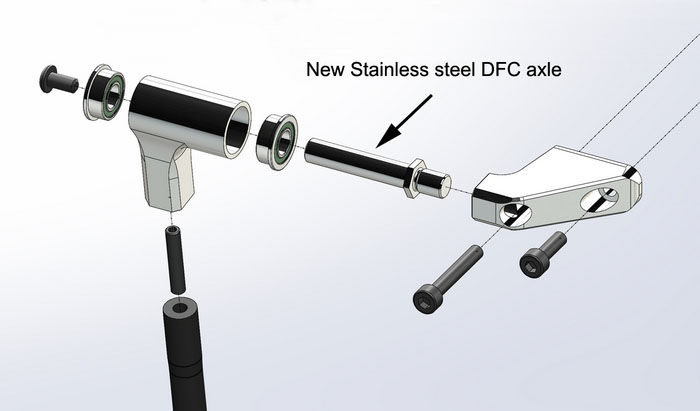 5) New side plate on conical pulley.

Again from customer feedback we added a side plate to the conical tail-driving pulley for cases when people don’t tension the tail belt correctly. This will give those customers some peace of mind. 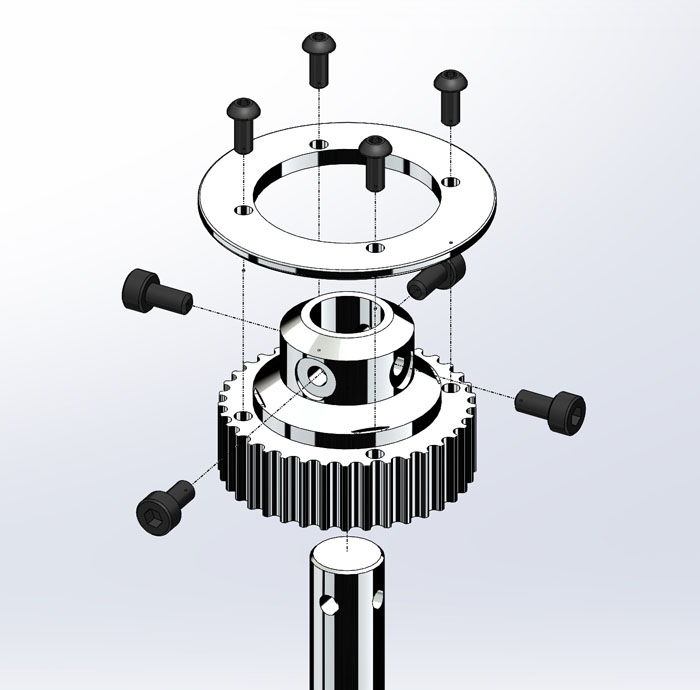 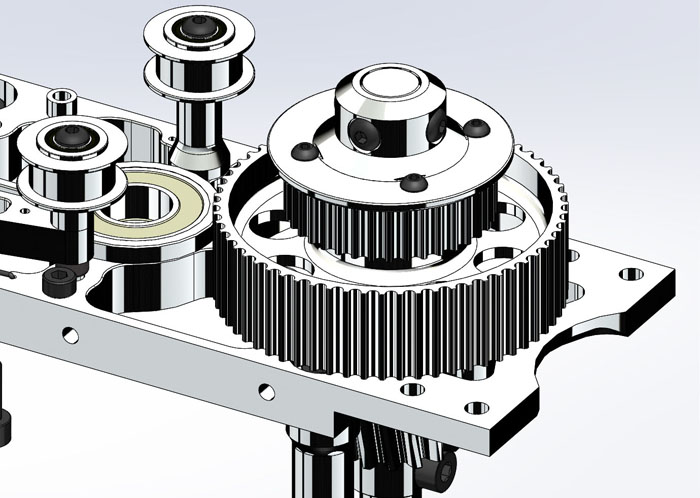 Even with the heli already being light we decided to revise all the parts to make sure the weight savings were maximized. We were surprised at how much weight we were still able to take off the heli. At the same time we improved on the plates and several part’s geometries. We also refined the styling of some parts like the pitch arms and some other parts. 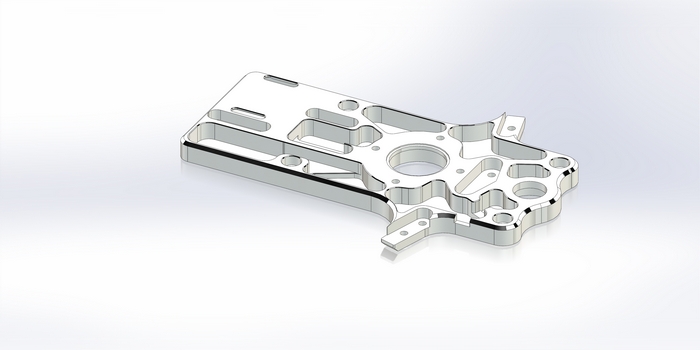 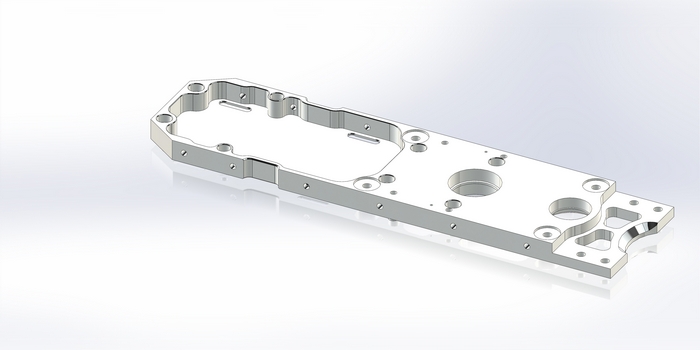 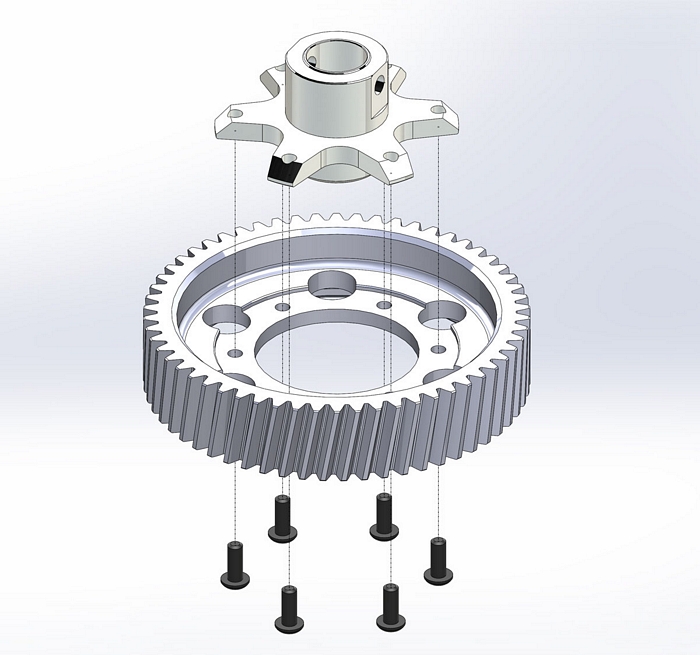 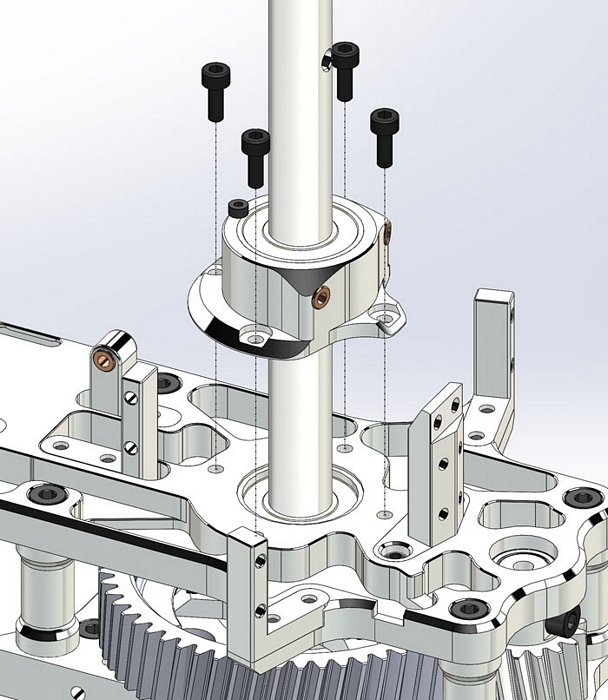 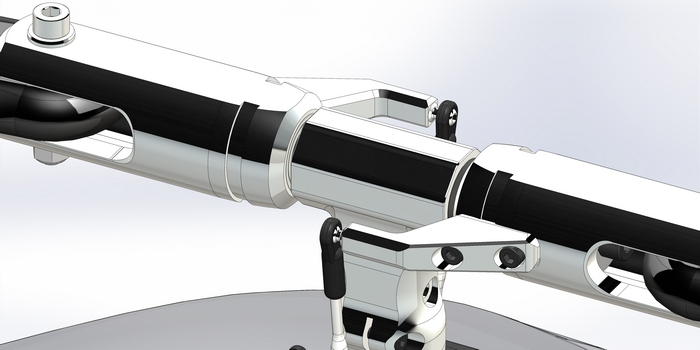 More refined styling in the pitch arms on both the Follower arms and DFC heads.

Also from customer’s feedback we made some optional electronics mounting plates that allow for busier electronics for people that want to add telemetry hardware and such. Since these are not needed for all applications they’re available as an option. 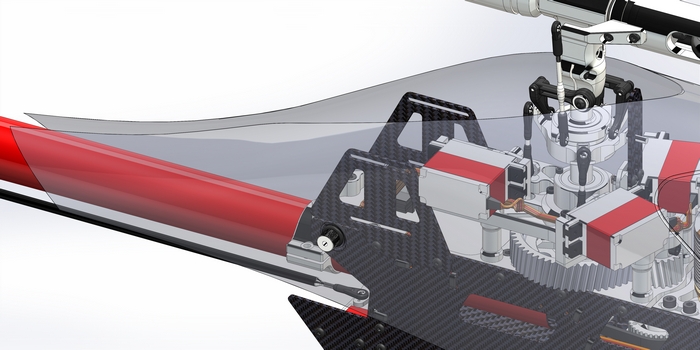 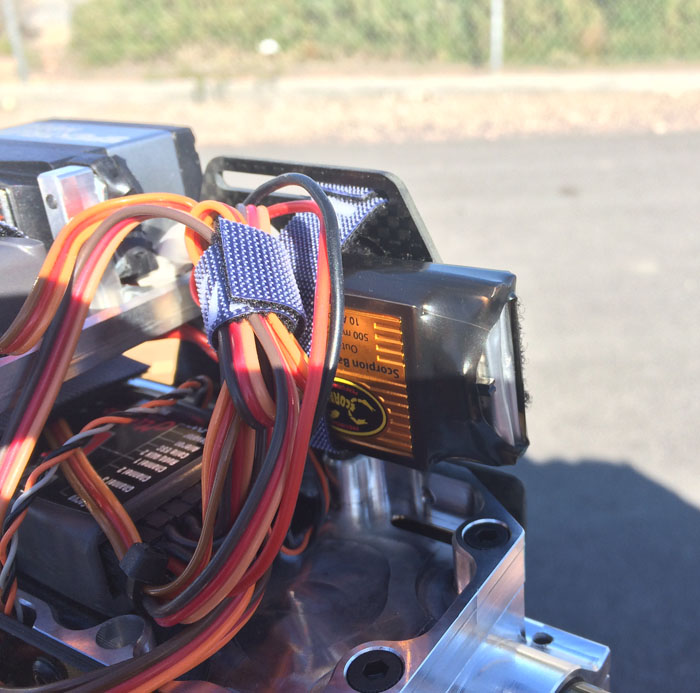 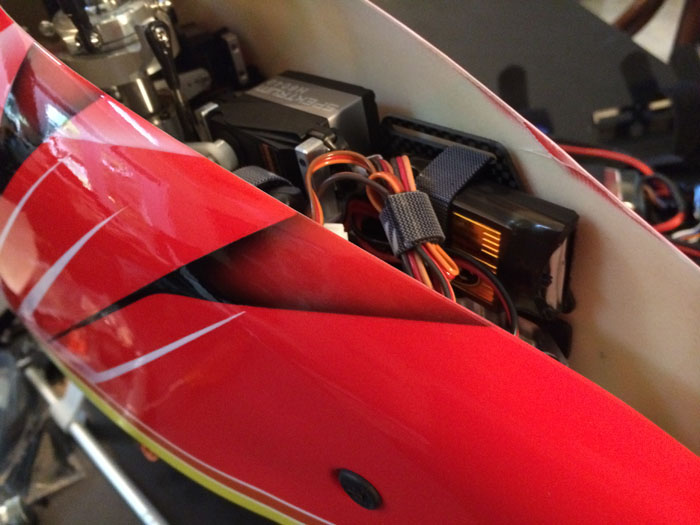 We are very happy that we have arrived at this point and are releasing the kits.

We do warn you that the Mostro is a very an addictive helicopter so you better get ready for a ton of fun.

If you haven’t yet go ahead and order yours by clicking on this link.