Pre-Orders for the Mostro 700 helicopters are open now.
No deposit and no charges until shipped and you can cancel anytime.
Click here to go place your pre-order at CarbonXtreme.com

There is a 3D monster inside you.  Let it out; unleash the beast inside you with the ultimate refinement in the current trend of helicopter designs. 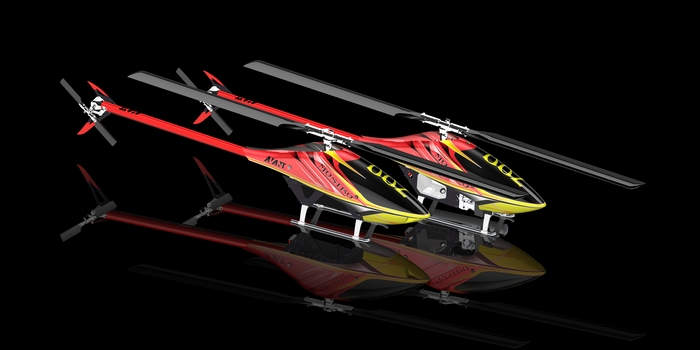 Aptly named the “Mostro”, the machine is the refining of the current trends in the helicopter world  It is a double stage, direct-to-swash machine available with either a refined DFC head, that combines the  superior technology used in the RigidCore head with a correctly designed Direct Flight Control (DFC) system or the follower arm version of the RigidCore head for the Mostro. 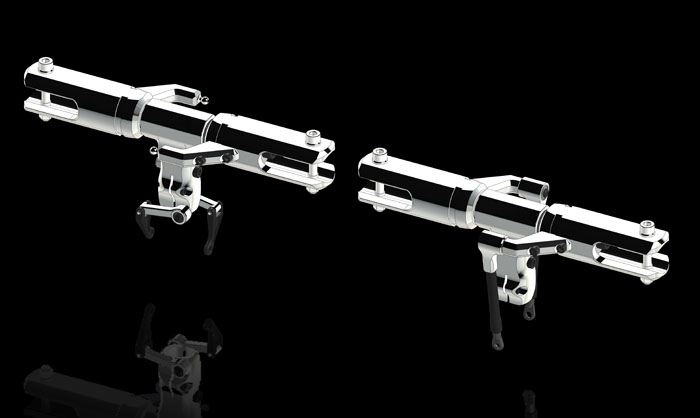 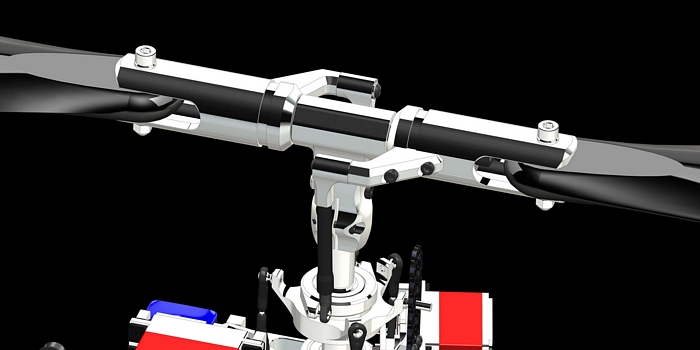 Two heads from the headmasters…

Some people say that FBL heads are all the same because  the flybarless unit is the one doing all the work.  But, people who owns a RigidCore head knows better than that. The RigidCore head is a refined design that has none of the bad tendencies that plague other FBL heads have such as: wobbles at low head speeds; low energy retention autos; dampening-generated vibrations, and other well known issues that people tend to dismiss as quirks. We at Avant are not happy unless the flying experience is one of true mastery of the mechanics and physics of the machine. This is why we took the time to refine a DFC head that would match our standards.

We wouldn’t be happy knowing that a potential fatigue issue such as the one that plagues many DFC designs would  lead to a crash or alternatively, designers trying to minimize the fatigue problem that end up making the system loose enough to lose precision and crispness.

We combined the tried and true system used in the RigidCore head with polymer-based DFC follower arms that would create the perfect response  yet remain durable and precise.   We also added a small pinhole to the polymer that allows for the insertion of a small 1.5mm pin used to rotate the polymer bar,  affecting the “turnbuckle” threads at the end. This makes the snapping in and out of ball links unnecessary, and allows for minute adjustments.

Unlike other designs, the DFC pivot point doesn’t rest on a screw, it rests on a milled shaft integral to the pitch arm eliminating the fatigue point of a screw interface.

Also, the design of the head yoke block is a piece of art. If you can make  something awesome from the engineering and performance point of view why not also make it beautiful? 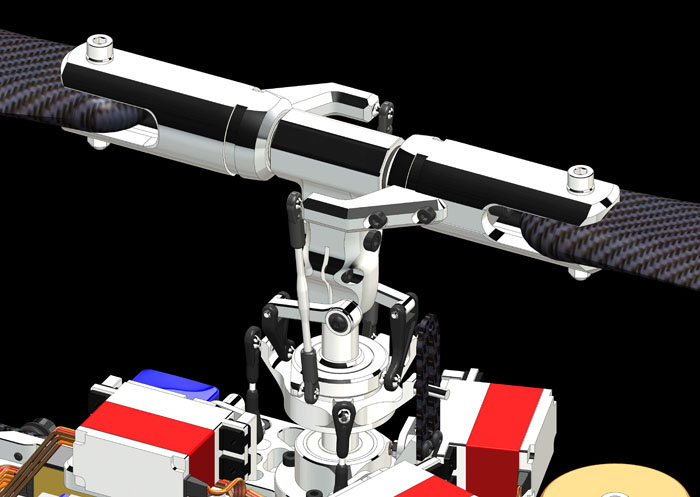 The Mostro version of our RigidCore head…

For those used to the excellent response of our original RigidCore head we have good news. We have made a Mostro low-profile version of the RigidCore head. The head has all the characteristics of the famous RigidCore arm follower head with the low profile used in the Mostro mechanics. Both the DFC and arm follower head are the same exact height so the style doesn’t change. You can chose the head you like for your Mostro helicopter from the beginning.

We wanted to have the shortest possible distance between the swashplate and servos without resorting to weird geometries, that forces the electronic FBL unit to fight back geometry  that is not best suited to mimic what the radio control system’s gimbal does.

No matter what system  you are using, the radio’s gimbal is composed of two potentiometers that measure two angles. Those angles are the  horizontal and the vertical movements of the stick by your finger.

The best way to match that is to have symmetry in those two directions. The  most critical direction in manoeuvres is the side to side movement, which is naturally better driven via two “mirror-image” configuration servos, so that  manoeuvres like fast aileron tic-tocs are performed mostly by the mechanics and less by the electronics trying to compensate for the mechanics weird geometry. This results in  a lessened delay between the FBL gyro sensors  detection of an unintended movement created by odd geometry, and also a lessening of the correction that it has to do to compensate. 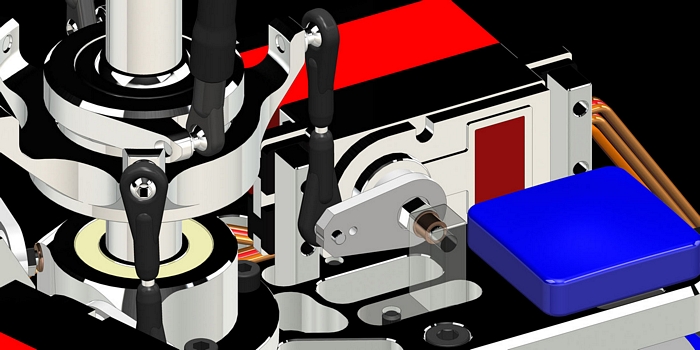 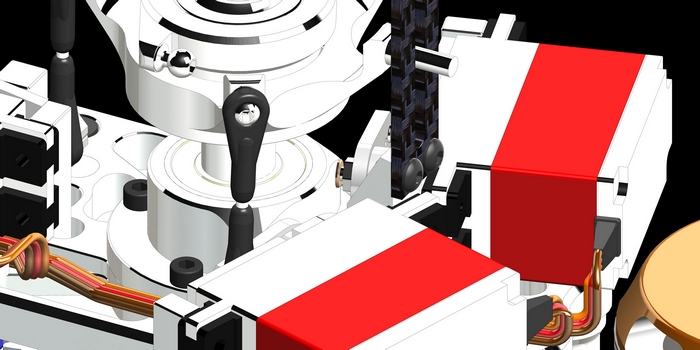 Servos need our support too…

Another thing we had seen was how fast the cyclic servos wear out because of the load on the servos that is carried exclusively by the force that the servo shaft applies to the servo case.

Servos are designed to handle torque via the gears, but not so well when forces are applied to the servo trying to bend the servo shaft. You can eliminate that by using push-pull servos driving bell cranks, like we used in the Aurora, but a push-pull system can’t be used in a direct-to-swash approach.

We thought about it and we decided to eliminate those forces by adding a support for the servo shaft by the addition of bearing-grade bronze bushings that receive a small stainless steel shaft we added to the servo screw. This eliminates the wear of the servos, saving a ton of money on servo replacements. The kit comes with the correct threads and lengths for the most popular brands of servos. 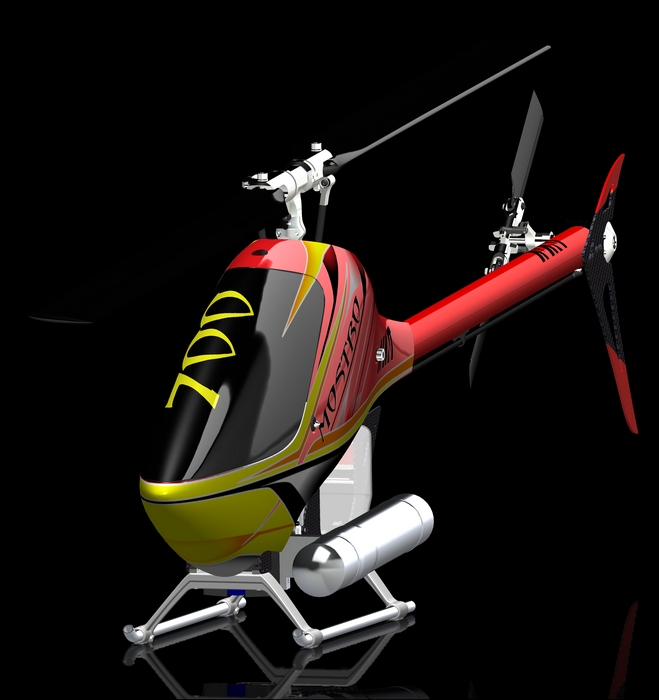 Bada-Boom! There go the boom supports…

Boom supports are a thing of the past. The machines need to look nicer. The technology is available so why not use it? Yes the obvious answer is Carbon Fiber. The lightness and extreme rigidity of the boom made out of carbon can only be enhanced when a much larger diameter boom is used. Also why round? Because round is the ideal cross-section to handle torque. If you want to try to test it yourself try applying torque to a toilet paper cardboard roll and you’ll see that the small flimsy material can handle quite a bit of torque. Now try that with a square or rectangular tube made out of the same material and you’ll see an order of magnitude of difference in torque handling.

It is not only the shape of the boom that  is important, but also how it is supported. In the Mostro we have two far away spaced boom clamps that decrease the bending force applied to the boom.

We also made  the area of physical contact between the clamp and the boom very large so that the  clamp pressure  is spread across a larger area, protecting the tube from damage due to excessive tightening. 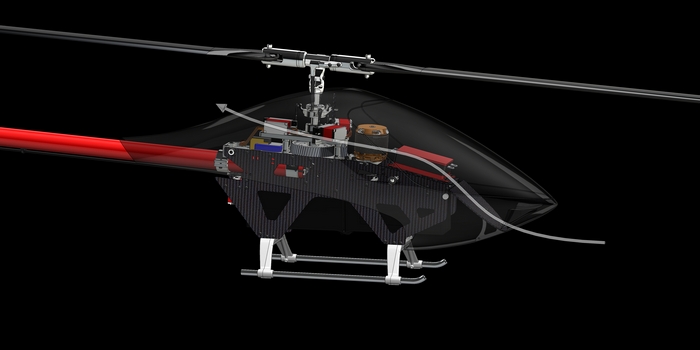 Because you’ve got to stay cool…

We wanted to have a way to let air in the canopy, without it looking like a patchwork of holes, and without it increasing drag. That problem was also an issue many years ago, and engineers at NACA (today’s NASA) came up with an air inlet design that allows for a high flow of air inside and minimizes the drag. We also wanted it to be functional, and again beautiful, so we added two very large NACA air inlets to the bottom of the canopy and added an air diverting plate to direct the air flow to the ESC and motor area.

Just to make sure it worked we put together a canopy with the diverting plate and tried it outside a moving vehicle. We were quite surprised at how much air goes into the canopy. Once we saw the little hurricane inside the canopy and how effective the NACA design was to draw air inside we knew it was going to be cool inside that canopy. 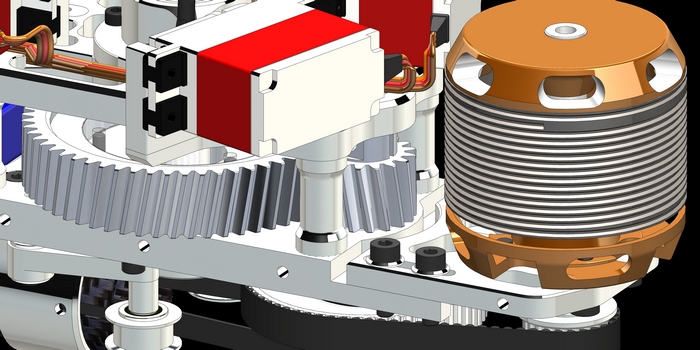 The generously sized main gear uses a much stronger tooth design and a special helical angle. Most helical angles available are not actually the best suitable angle for the application we have in radio control helicopters. Because of that we made a special angle and tooth an important part of the gear system. The large diameter gear implies lower forces per tooth applied, and the larger size of the tooth itself means much stronger strength at the base of the larger tooth. 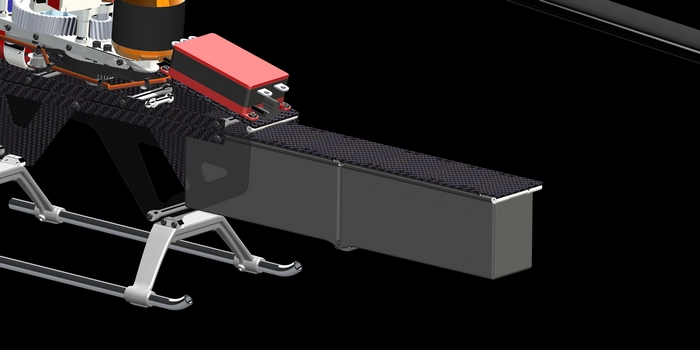 Most flyers in the hobby go to the field on a weekend and when they go to fly they spend the first couple of minutes of the flight calming down from the excitement, and when they’re just starting to  enjoy the flight then all of a sudden they’re out of power or fuel.

Something as simple as battery capacity that would fit in the heli or tank fuel size can solve that problem.

The Mostro Nitro has a large 736cc tank for the fuel hungry 120 class of engines. This tank easily allows for very long flights and extends the pleasure part of the flight quite a bit.  The same applies for the batteries.  We designed  the Mostro with the ability to carry up to 8000mah batteries. An interesting thing about large batteries is that because of the large  number of milliamps a cheap 35C 8000mah battery can supply the same current  as a 65C 4000 mah battery can, but you get to fly around 8-12 minutes instead.

This is truly a new approach that we are introducing in the market.

When designing the Mostro, we wanted to have all the mechanics connected rigidly, without flexible elements unless dampening is required. The result was the design of what we call the Mostro “Monoblock” ( single block).

In the Monoblock design, all elements of the system that affect the gyro sensing are mounted in a rigid superstructure. No part rests on the flexible frames unless it needs dampening.

The Monoblock is actually the flying helicopter.  Leaving practicality aside, you couldstrap some batteries to it without frames and fly the thing by itself! 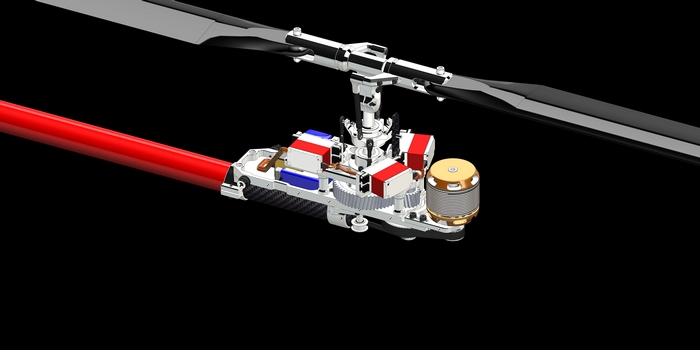 Nitro vs Electric? How about both?

One of the best things about the Monoblock is that you could have one Monoblock and switch it between nitro and electric frames without much trouble. If you’re not sure what you like then have it your way and change it later if you want.

The nitro has a bearing block that uses the same bolt pattern  as electric motors so that even the motor plate is used in the nitro. Swapping between them is pretty simple. 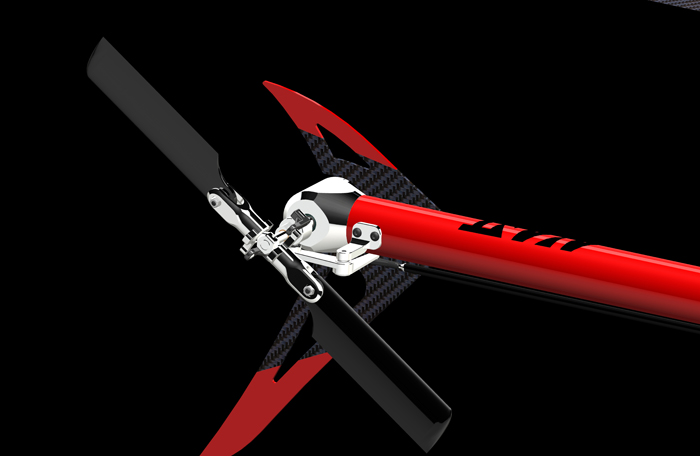 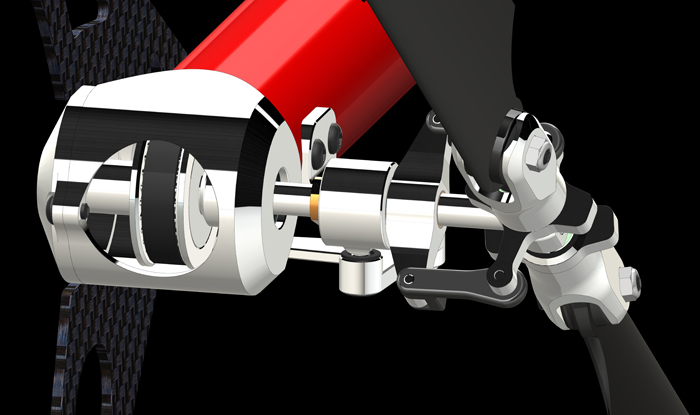 A dream of a tail…

A metal version of the amazing Aurora tail system is featured in the Mostro. The large travel allows for minute precise corrections without overshoot and it’s corresponding error correction by the gyro system. Smooth and crisp is the everyday response of a well designed system.

The price is right…

Pricing for the unit is US$899.99 The first batch of Mostro kits in the 700 size will start shipping in October. You can also pre-order it at CarbonXtreme.com now.

Most people don’t know this, but because we setup a mostly automated manufacturing facility our pricing of spares has been the same as Taiwanese manufacturers for about two years -almost to the cent, so you can now fly USA-made high quality product at Asian prices. 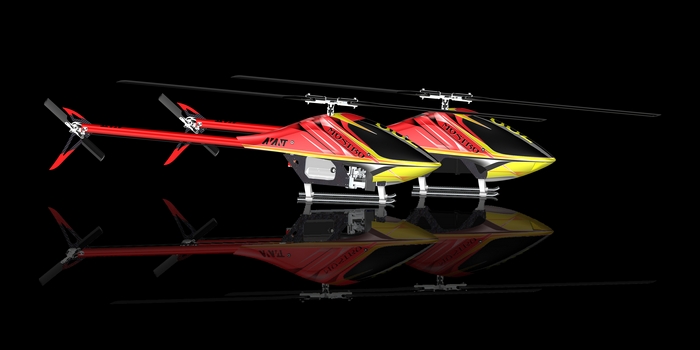 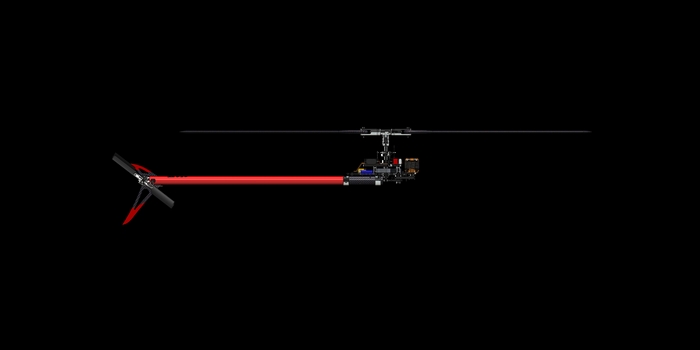 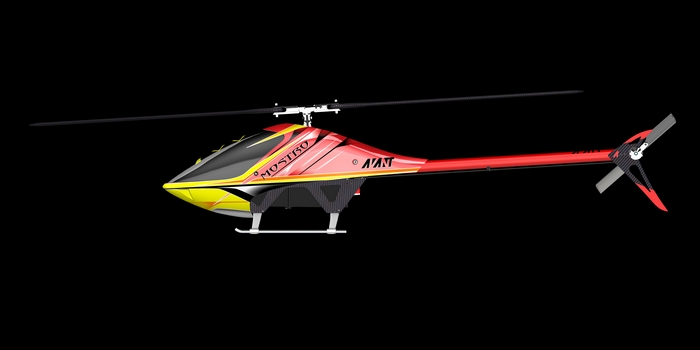 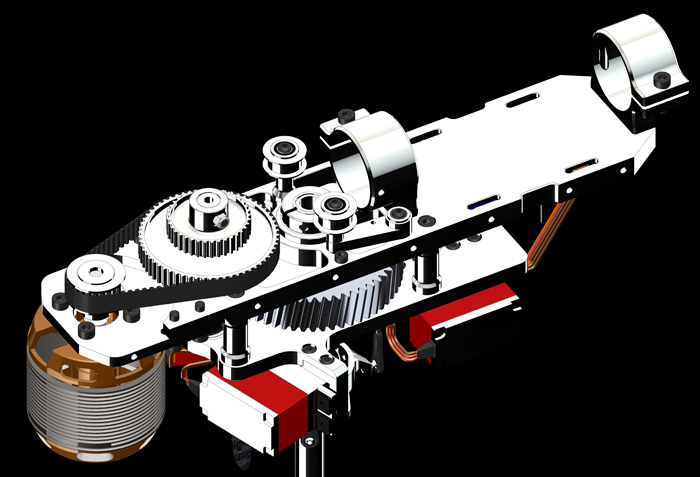 Pre-Orders for the Mostro 700 helicopters are open now.
No deposit and no charges until shipped and you can cancel anytime.
Click here to go place your pre-order at CarbonXtreme.com